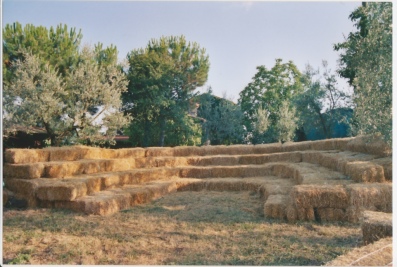 The first straw theatre was built in 2003 in Italy. The venue was Rendola, a small village in the Tuscan hills near the Chianti area, where it has reached the 11th edition.

A theatre built entirely of straw bales: the idea comes from Italy, where in the year 2003, in the small Tuscan village of Rendola (50 km from Florence), the first straw theatre was built by Nicholas Bawtree, an environmental journalist.
The experiment of building a temporary structure in the traditional ancient Greek and Roman form coincided with an experimental form of performance: the spectators could participate directly both in the building of the theatre and in the creation of a performance in the form of short contributions, using any form of expression, with any possible theme, without any predefined order nor any kind of competition.
In the years that followed other straw theatres were built all over Italy, and recently also in other countries such as Spain, England and Germany. In 2011 an Italian collective of straw theatres called “Rete dei Teatri di Paglia” (Straw Theatre Network) was formed to bring together various experiences. In 2014, this collective has become international, with additional help from the Slow Food movement.

You are welcome to join us by writing (in Italian, English or French) to: